Carbon Compensations: the stock market of the future

What are carbon compensations?

Carbon compensations also known as carbon offset is the action intended to compensate for the emission of carbon dioxide into the atmosphere as a result of industrial or other human activity, especially when quantified and traded as part of a commercial scheme. 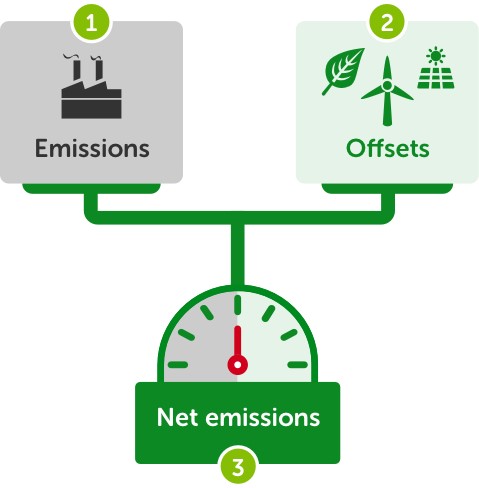 Because greenhouse gases are widespread in Earth’s atmosphere, the climate benefits from emission reductions regardless of where such cutbacks occur. If carbon reductions are equivalent to the total carbon footprint of an activity, then the activity is said to be “carbon neutral.” Carbon offsets can be bought, sold, or traded as part of a carbon market.

Carbon offsets can be bought and sold as part of compliance schemes, such as the United Nations Framework Convention on Climate Change (UNFCCC) Kyoto Protocol or the European Union Emission Trading Scheme (EU ETS; a regional carbon market where European countries can trade carbon allowances to meet regional emission-reduction goals). “A benefit of carbon offsetting within such compliance schemes is that it enables emission reductions to occur where costs are lower, leading to greater economic efficiency where emissions are regulated.”

The Kyoto Protocol requires parties in the developed world to limit greenhouse gas emissions relative to their emissions in 1990. Under the Kyoto Protocol, emissions trading in a so-called carbon market may help them meet their targeted limit: a party can sell an unused emissions allowance to a party above its limit. The protocol also allows carbon offsets to be traded. “Kyoto Protocol parties can obtain offsets through a mechanism called joint implementation (JI), where one party develops an emission-reduction or emission-removal project in another country where emissions are limited.” (“Ankuram IAS | Page : Article Detail”) “Parties can also obtain offsets through the Clean Development Mechanism (CDM) for projects in developing countries, where emissions are not otherwise limited.” (“joint implementation | international agreement mechanism …”)
“Consumers and businesses may also voluntarily buy carbon offsets to compensate for their emissions.”

Large purchasers of offsets include organizers of major events such as the Olympic Games, which can aspire to be carbon neutral, and companies such as Google, HSBC Holdings PLC, and IKEA. The voluntary market in offsets is largely unregulated, though several international standards have been developed to assess their quality. For example, in March 2006 the International Organization for Standardization (ISO) developed standard 14064 on greenhouse gas accounting, verification, validation, and accreditation of standard-setting bodies. In addition, the Gold Standard registry, created as a tracking database for the CDM and the JI, was developed in 2003 by a consortium of nonprofit sponsors to certify carbon projects and track credits.

How  do you compensate you carbon emissions?