Net Carbon Zero, what is it?

What is net zero?

Net zero refers to a state where the carbon emissions put into the atmosphere are balanced out by the emissions put out. This term holds great importance since as far as CO2 is concerned this means that global warming stops.

The Paris agreement states that this balance should be achieved by the second half if the 21st century.

The ‘net’ in net zero is notable as it would be essentially impossible to reduce all emissions to zero in the time frame given.

In order for net zero to be effective it needs to be permanent or ‘hard’. This means that in addition to widespread cuts in emission the removal of CO2 from the atmosphere should also be scaled up.

Net zero is an internationally agreed upon goal to reduce global warming in the second half this century, and the IPCC (Intergovernmental Panel on Climate Change) concluded the need for net zero CO2 by 2050 to remain consistent with 1.5⁰C.

Why do we need net zero?

Net zero must be reached in order to achieve the goal set by the Paris Agreement which is to keep the temperature below 2⁰C above the levels of the pre-industrial era and limit temperature increase to 1.5⁰C. Thus, global balance between emissions and removals must be reached by 2050.

Even though the Paris Agreements sets a global goal, action must be taken on national level as every country must take responsibility and set its own policies and rules in order to achieve the common goal.

The right way to net zero

Actions to be taken

The Berkeley Lab has identified 8 actions that must be taken in the next 10 years in order to achieve Net zero by 2050. 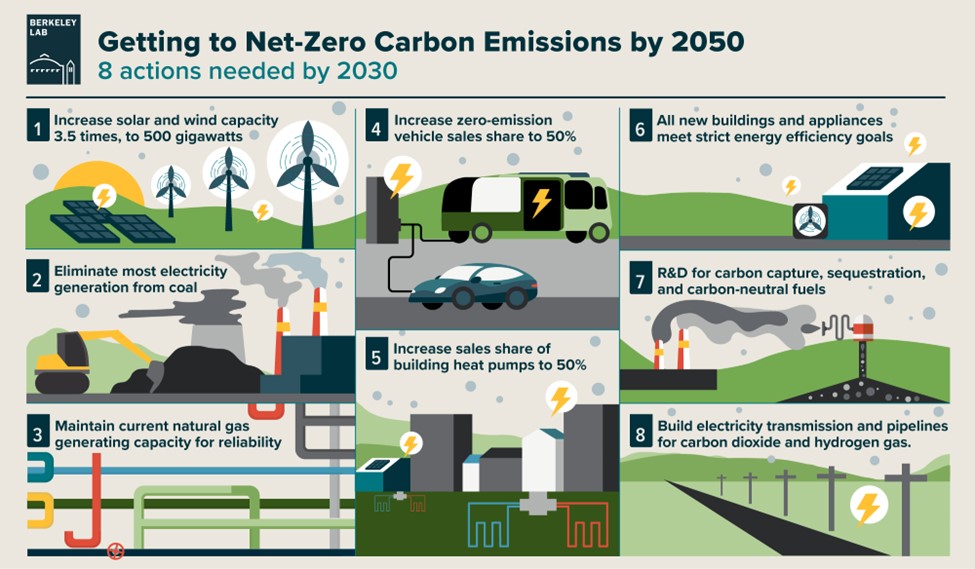 In the short-term, it is needed to increase generation and transmission of renewable energy, making sure all new infrastructure, such as cars and buildings, are low-carbon, and maintain current natural gas capacity.

According to McKinsey& Company to reach net-zero emissions by 2050, the European Union has a long road ahead. In 2017, the EU-27 countries emitted 3.9 GtCO2 e, including 0.3 GtCO2 e of negative emissions.3 Although this accounts for only 7 percent of global greenhouse gas (GHG) emissions, the EU achieving climate neutrality would have a big impact on the global climate challenge

Companies must find proactive and innovative ways to either reduce their emissions or offset them.